This is a topic I’ve been working on for some time, both for my own intellectual gratification, and to pass on once my ruminations are complete. For a bit of a taste, here’s an interesting piece I came across on another blog chrisdclerico.com about a photographer in China who saw an opportunity and patiently waited for the “decisive moment”. Then, he was chastised for it in the press, but perhaps his work prompted action (photographs can be a call to action, you know).

Here’s the link to the article: www.ananova.com/news/story/sm_1399668.html

Here’s the teaser photo (part of a series): 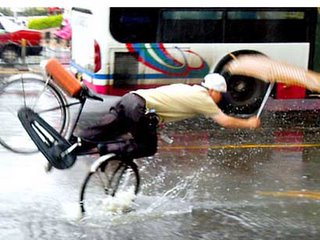 Doesn’t that just say everything you need to know? 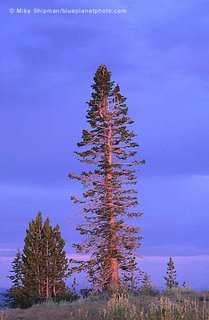 There are several techniques and products for cleaning dust and debris from the CCD or CMOS sensor on digital SLR cameras (cameras with non-removeable lenses don’t have to worry about this). I started out with Eclipse fluid and sensor swabs www.photosol.com but using fluid to clean the sensor on my 1Ds made me a bit worried. Used properly, the method is likely safe. But, as with all things fluid, accidents do happen. So, I started looking around for another method and came across Visible Dust, a Canadian company that manufactures electrostatic brushes for sensor cleaning. These tools resemble paint brushes but are made of very fine strands that are activated (charged) and cleaned by blowing compressed air through the bristles. I purchased a set last spring and I have to say I’ve been very happy with the performance. One or two swipes across the sensor with a dry brush and most, if not all, dust specks are removed from the middle as well as the edges and corners. Quick and easy.

One issue, though, is with the use of canned air to blow across the bristles. Canned air can spit freon and other liquid compounds that can get onto the bristles and then to your sensor. Also, compressed cans of air are not allowed on airline flights and may be difficult or impossible to find in out-of-the-way destinations. So, Visible Dust has come out with a new product called the Sensor Brush SD, which is basically a motorized handle that fits the sensor brush and spins it, both cleaning and charging without the use of canned air. This accessoriy is estimated to cost about $38 US (depending upon the CAN-US curency conversion rate at time of purchase). I don’t have the Sensor Brush SD, but I’m considering it. 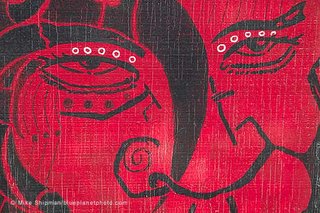 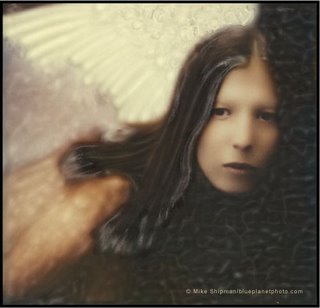 And The Angels Bled
Polaroid SX-70 manipulation by Mike Shipman

I knew it was inevitable. A 30-yr old film generally hanging on by a
thread from the beginning, in terms of its “flaw”, then being
championed by artists all over the world, creating the market so
Polaroid would keep the “flaw” intact (for the most part) and artists
could exploit it for decades. Now, Polaroid has said they will end
production of Time Zero film in the first quarter of 2006.

You can read the notice below, which I lifted from the Polaroid website at
www.polaroid.com/sx70/en/index.html

***
Please be advised that Polaroid will be discontinuing the manufacture
of its SX-70 / Time-Zero film within the first 3 months of 2006 due
to the phasing out of components used in the production of this film.

We realise that this is disappointing news for our loyal SX-70 users
and we would like to underline that, although the circumstances made
it inevitable, it was not an easy decision.

We are very sorry for the inconvenience.

For customers who would like to continue using their SX-70 camera, we
can offer some film alternatives below. However, we do appreciate
that these films do not offer the same characteristics as SX-70 /
Time-Zero film.
***

SX-70 film, now called Time Zero film, came out in 1972 with the Polaroid SX-70 Land Camera, a folding Polaroid that, for its day, was the most advanced camera on the market. The film had one “flaw”. The emulsion did not harden as quickly as it was supposed to, allowing artists using various tools to push and smear the dye and base layers around to create impressionistic-looking, or “painterly” images. Sometimes called SX-70 manipulation (a long term), altered SX-70, painterly photography, or a variety of other terms, the essential description is that it is done by hand. Some people continue the process through digital manipulation or painting/drawing over the Mylar cover with oils, acrylics, or inks, or otherwise embellishing the image. I tend to prefer the straight altered image. I do scan the originals and enlarge them for printing, but I don’t do any further manipulation.

Since the original film has depth (in that the emulsion is composed of several layers) the altered image also has depth, which can accentuate the feeling of depth in the image and also be apparent under certain lighting conditions and viewing angles. A print, although striking when enlarged, lacks this dimensional component.

Being only 3″ x 3 1/8″, the film has a small working area, so tools and timing are important in creating the effects desired. However, in reality you’re not ever really sure what you’ll end up with once you start bacause the work is done in real time, you create more or less on the fly. Environmental conditions, mental and emotional state, relationship to the subject, tools used, among others, all play a role in how the final piece turns out. 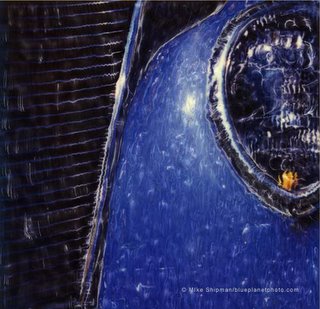 The process starts once the exposure is made and the film is passed through the rollers, squeezing the developer across the film. The development can be arrested by putting the film at that point into the freezer, but I like working on the image “live”, at the moment. I have a “toolkit” of manipulators that I carry with me, but I will also use found items on site. Sometimes, I will use only found items, then discard them once the image is done, thereby preserving the effect on the original.

I create 2 types of original SX-70 manipulation. By original I mean that the manipulations done are different for each image created, no two being the same. Much like 2 paintings of the same subject.

The first original is created with the Polaroid SX-70 camera. This results in a “true original” in that the image cannot generally be repeated. The image is shot with the camera, the film is processed on the spot following the exposure, and the manipulation of the image is done at that same point in time.

The second original is done using 35mm slide film and a slide printer (Daylab). For this I am using a 35mm transparency and exposing the SX-70 film with that image, similar to how a print is made in a darkroom using a negative and enlarger. The image is then altered after the film is exposed. In this case, several different original “versions” of the same image can be made; originals in that each separate image is manipulated using different techniques, pressures, emphasis, etc. Using the 35mm (now digital) camera allows for more flexibility in lens choice, lighting options, shooting conditions, etc. To effectively work the emulsion on the Polaroid film, the temperature of the film needs to be above 80 degrees (F), so wintertime manipulations are tricky at best. Enterprising artists have come up with ingenious mobile heating devices to allow for manipulations to be done in less than optimal conditions.

So, this art form will be disappearing (new creations anyway) in 2006. Unless another lab can replicate or purchase the “recipe” from Polaroid to continue production. I’ve been buying as much film as I can to build up my library of SX-70 work. I’ll definitely miss it. 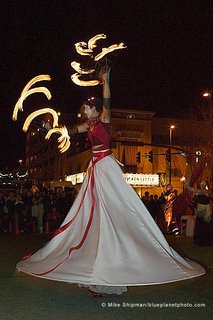 One of the things that continues to bother me about current trends in society is the increasing determination to impart some relevency to words that have completely lost their meaning. Like “Christmas”. Seems that this year the debate and ruckus revolves around whether the traditional pagan symbol of the “Christmas Tree” should be referred to as a “Holiday Tree” instead. I’m not going to get into the “Merry Christmas versus Happy Holidays” debacle because it’s all the same silliness.

Christmas is about the birth of Jesus, not giving presents, although presents were purportedly given to the newborn which probably started the tradition and soon overtook the essential spirit behind the event. Now, I’m not a die-hard Christian, nor a true believer, but I do ascribe to the basic idea of a caring, spiritual, treat-others-as-you-would-have-them-treat-you, way of life. I’m also not getting into any discussion here over the traditional or modern interpretations of Christmas, etc. Essentially, I don’t care what religion is being espoused as long as it doesn’t impinge on my own personal belief system (in other words, don’t come to my door trying to convert me – but that’s another story). See, freedom of choice is one of the foundations of Christianity – in so much as freedom is allowed by a God who demands you obey and believe implicitly or you go to Hell (but that’s also another story).

So, what I (or you) believe, what spiritual meaning I (or you) give to “things”, is in no way shape or form related to how the “thing” is identified by name.

Claude Monet said “To see we must forget the name of the thing we are looking at”. 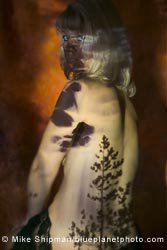 By relying upon the name of a thing, you tend to fail to look beyond to what it is, how it is, why it is, what it means or represents, how it relates to my/your life or the life of others. A name only serves to separate the thing from other things, to make it easier for people to discuss it and not get confused whether we’re talking about a car or a fork.

The name of a thing is a purely human construct arrived at through millennia of language development. Example: scientific nomenclature for animal and plant species (Latin names). The primary reason Linnaeus came up with this system of classification was because one person shouting “Hey, grab my ferret, will ya?” might not resonate with another who looks right at the animal and does nothing because to them it’s not a ferret, but a “polecat”. I’m sure you can think of many other examples of “common name mix-ups” – diaper/nappy, wagon/trolley, etc.

So, to call a pine tree (insert favorite species here) a Christmas Tree or a Holiday Tree, SDT (standing dead tree), firestarter, or to even boycott a dead tree merchant because their trees are not labeled “properly” is meaningless since most people are only referring to the very outer shell of the thing rather than what it is or symbolizes; which in the Christian sense is not the original meaning of the Yule tree anyway.

And, as far as we know, the tree doesn’t care what you call it, either. 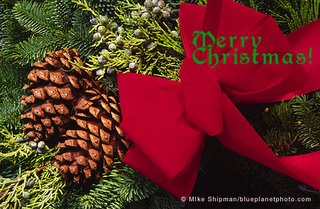 Here’s a weekend photo gathering that is fun and informative. Shooting the West XVIII is held March 10 – 12 in Winnemucca, Nevada (a couple hours west of Elko in the north-central part of the state) and this year will have speakers such as Charles Cramer, master printer and landscape photographer, Robb Kendrick, Richard Menzies and more. A photo contest and field trip are also on tap. Go Here for more infor and to register. I’ve been once and it’s a good time.