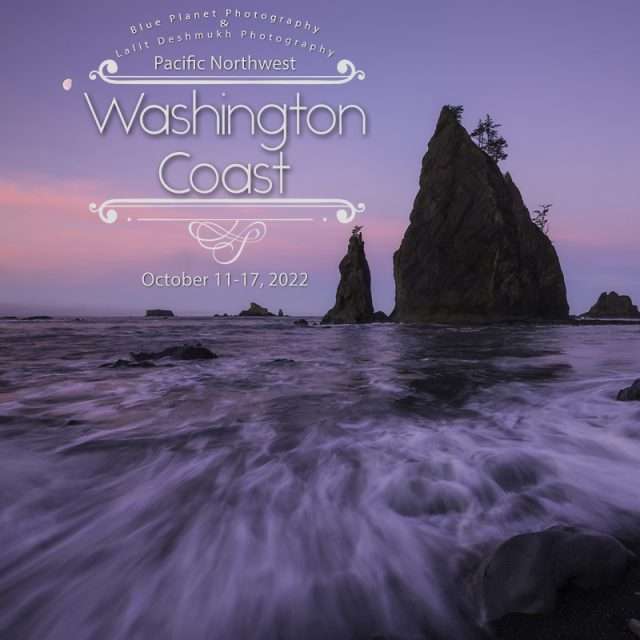 Join myself and my good friend Lalit Deshmukh for 7 days, 5 full days of photographing, on the Washington Coast of the Pacific Northwest. We’ll visit waterfalls, amazing beaches, and primordial rainforest, exploring and experimenting and becoming better photographers through awareness, seeing, and contemplation.

The coast of Washington State in the Pacific Northwest is the longest undeveloped coastline in the United States. The rugged, rocky shore exposes the remnants of the ancient North American coastline as ragged sea stacks that have withstood millennia of the relentless pounding of storms thrown at it from the Pacific Ocean. One of the largest and last remaining temperate rainforests in the world, with its lush green canopy of giant Sitka spruce and Western hemlock, takes you back in time with a bit of a Primordial essence. This workshop is conducted at a ‘photographer’s pace’ to allow for as much immersion into the environment as possible, using our senses and perception along with camera technique to make better photographs and to both experience as well as photograph amazing landscapes, abstracts, and intimate nature imagery.

Join me March 20-27, 2018 to explore the beautiful, minimalist landscape of New Mexico’s White Sands National Monument, a dramatic environment of shifting contrasts, lighting, patterns and textures with a backdrop of the rugged San Andres and Sacramento Mountains. Emphasis during this workshop will be your interpretation of the stark dune environment using your senses and perceptions to search for simple, elegant compositions using elements to give depth, graphical design, and abstract impressions from broad panoramics to up close macros. We’ll discuss in a group and individual one-on-one guidance about using light and shadow to create form, improving composition, setting exposure under difficult lighting conditions, abstract impressions, and sensing and perceiving the environment to help find subjects and make meaningful photographs. Each student will also receive a copy of my book The Ecology of Photography.

Also, I’m excited to share that this workshop has been chosen as an Unordinary Trip of the Month by Infohub.com, the #1 portal on the internet dedicated to out-of-the-ordinary, special interest vacations. If you book my White Sands National Monument photography workshop before January 5, 2018, you will be entered in a random drawing among those registered for my workshop to receive a one-year full membership to the GPSmyCity app for Apple and Android, from InfoHub’s sister company GPSmyCity. Since there is a maximum of 8 for this workshop, your odds are pretty good!

The GPSmyCity app features offline city maps, self-guided walking tours, and travel articles for 1,000 cities worldwide. Because the app works offline, there’s no worry about roaming charges when using the app abroad. One lucky person who has registered for my White Sands photography workshop will be randomly selected to receive a one-year full membership to the GPSmyCity app and the over 6,500 self-guided city walks, offline city maps, and travel articles, a value of over $8,000 (includes all in-app guide purchase options).

Here’s a special deal offered by Icelandair: 5 days, 3 nights, hotel, some meals, some activities, and airfare, starting at $685. I’ll sweeten the deal in that if you pay my way (double occupancy or single), I’ll provide you with one-on-one photo assistance during the trip. I’ll pay my own transportation to Seattle as the departure city, meals and other expenses. You pick the dates (for Northern Lights, go with February or March). I will depart from Seattle. Here’s the link with info. The catch is the deadline for booking this deal is July 31.
Icelandair Hot Springs & Northern Lights travel deal

Contact me for more information and to make arrangements.

Join me in exploring fascinating locations, improving your skill, pursuing your vision, making friends, and having fun in all areas of our planet. Each workshop location and itinerary is meant to challenge, inspire, and excite you, and allow you to reach outside your comfort zone (where most learning takes place). Beginners to advanced photographers welcome.

Here are my upcoming photography workshops. Full details and registration are here

My Kickstarter campaign is coming to a close on Monday morning. I’m about 1/3 funded, but if it’s not 100% at 11:00am Monday, unless there’s a furious and exciting rally this weekend, it won’t matter. I’ve set it up as an all-or-nothing campaign.

A day ago I launched a campaign on Indiegogo.com so it will be available once this campaign ends. I set it up using their flexible funding option which means I will receive whatever funds are submitted. It’s not all-or-nothing. I’ve reduced the funding goal and the number of reward levels to reflect the popularity of reward levels for this campaign. The items in each reward have not changed. If you’ve contributed to Kickstarter at a certain level, that level and reward (perk) is also on Indiegogo and you can choose it again.

When the kickstarter campaign ends on Monday, if you would like to continue to support this project, you can go to the Indiegogo campaign and renew your pledge at the level you would like and it will take effect. It’s also set up to be able to go over the $3000 goal. If that happens, the same upgrades apply – better paper, more pages, larger format book, depending on the amount over the goal. The deadline for that project is April 28. I’d like to point out that you will need to click on the perk level to “officially” contribute at that level and so I know which perks to create for you. There is a “Contribute Now” field at the top where you can contribute any amount, but that contribution is not associated with any perk items.

When you contribute to the campaign on Indiegogo, you can use a credit card through the gateway, Apple Pay (US card holders only) or PayPal (you can use the Guest checkout to avoid needing a PayPal account), or your PayPal balance. Your credit card or PayPal account will be charged immediately after you complete the checkout process, not at the end of the campaign.
I don’t want you to go there now if you’ve already pledged on Kickstarter, just in case there is a rally. I really don’t want you to be charged twice. So, wait until Monday after 12:00 to make any contributions at Indiegogo. Though I think you can cancel your pledge on Kickstarter prior to the end of the campaign if you want to make the leap earlier.

A second option is to directly contribute to the project through PayPal. This avoids the processing fee Indiegogo charges so your contribution is maximized. My PayPal account name is man@blueplanetphoto.com. If you choose that option, please indicate your contribution is for Scotland and what reward level when you check out. I also recommend waiting for this direct contribution until after noon on Monday. Just in case.

Whichever option you choose, I thank you for your continued support.

I gave a program this week at Deer Flat National Wildlife Refuge about Nature and Landscape Photography. I was asked by a few of the attendees to repeat the list of locations I put up near the end of my program. So, here they are. You can easily search out the specific location and directions from where you are as well as additional information about the area. Good luck and happy shooting!

The Government of Tanzania has approved the building of a major commercial highway across the northern part of the Serengeti, home to the world’s last great migration and a UNESCO World Heritage Site. The road will adversely affect the world-renown wildlife migrations in that region, tourism, and local economy. An alternate proposal is to build a road in the southern part of the Serengeti, an area less sensitive and where a road would be more beneficial to the local residents.

For more information, go to www.savetheserengeti.org/issues/stop-the-serengeti-highway/ 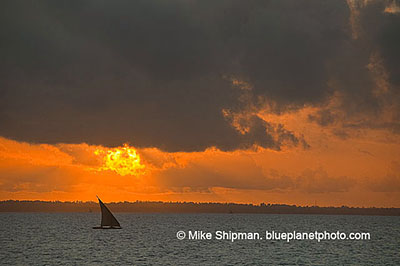 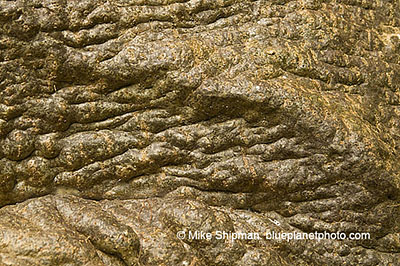 With only a couple days left before departure, imagine my concern when I read on the internet that workers for Kenya Airways are planning to strike and have not been working since August 14? I’m flying from Heathrow to Nairobi then on to Zanzibar on Kenya Airways, as well as returning the same route a month later. Workers wanted a 130% pay raise and were threatening to strike, even though some workers were already not reporting to work. This caused delays and cancellations of flights, leaving thousands stranded in airports across the globe.

Luckily, I just read an update on a meeting held today that stated a resolution was made and the strike called off. Workers received a 20% pay raise over 2 years. Whew! I hope they get the backlog cleared out before I arrive. Going to Zanzibar, I’ve got a little over 90 minutes between flights from Nairobi to Zanzibar. When there’s backed-up flights, that could be very little time. I’m still going to be checking status on Monday, before I leave on Tuesday, and Wednesday while I’m waiting at Heathrow.

Nothing like a little last-minute excitement to get the nerves going.

I started taking my malaria pills today. I chose to go with Malarone (atavaquone and proguanil HCl) out of the 3 medications I could select from. It’s got the shortest pre- and post-travel dosing schedule, the least and lesser side effects (not like another that warned of mental issues, sheesh), and is 98% effective. I start a couple days before traveling and take it for 7 days once I get back. I also predicted, based on the mild side effects and dosing schedule, that Malarone would be the most expensive of the 3. I don’t know what the others would have cost, but a 42-day supply of Malarone lifted $295 from my pocket quicker than a papasi. That, along with the yellow fever, typhoid, and tetanus ($390), I’m feeling a little drained, but recovering.

Whenever planning for a long trip, sometimes days are spent deciding what to take, what to plan for, then revising again and again. Once everything is brought together and the attempt is made to stuff it all into as few bags as possible, more revisions are made. For this trip I want to be as lean as possible. Transportation between Chumbe Island and Unguja (the island of Zanzibar) is by boat and there won’t be any place in Stone Town (Zanzibar City) to leave a bunch of gear when we go to town and walk around, get internet access for email, etc. I don’t want to look like a tourist (will be hard to do, but I’m trying to minimize as much as I can) and have all my gear flaunted out for every undesirable to see (also will be hard to do). Access to power will be limited on Chumbe and there is no internet or cell phone access.

I purchased travel insurance for the first time ever, mostly because of the threat of the Kenya Airways strike. The included medical coverage might be helpful, too, if there is a need. I don’t anticipate anything happening but it’s rarely a bad thing to be over-prepared. My main concern is loss of luggage and theft from my luggage, which is a concern whenever and wherever I travel.

So, the last couple days before I get on the plane. It’s packing day.