A while back, I had a scary incident passing through security at the airport. A guy ahead of me was in a hurry to catch a flight he was apparently late for, and in the melee of putting things in tubs and taking them out, grabbed my laptop rather than his (both black 17″ HP laptops). I would not have found out about the switch had I not had time before my flight and decided to do some web surfing to pass the time. When I tried to plug in the power cord, it would not go in. There was no input port for the power cord where I expected it to be. On further inspection, I realized it was not my laptop. Knowing the guy was late for a flight, I panicked and took off through the terminal looking for him, leaving my stuff behind. Luckily, we both were in a “dead end” terminal, so I only had about 6 gates to check. I eventually found him as the plane he was on started to board. He had told me he was on his way home to Australia, so that would have been the last I saw of my laptop and all my photos and data. My laptop is password locked so my data would have been inaccessible. But, he would have come out ahead because my laptop was a newer model.

A lesson learned. To keep my laptop distinguishable from all the other black, 17″ laptops out there, I purchased a skin and customized it using one of my own photos. What’s a skin? Simply put, it’s a sticker, a decal. Though, it’s not your typical paper sticker, but a durable vinyl material made by 3M, similar to the material used to wrap images and logos on vehicles. The adhesive on the skin does not damage the finish of your device and the skin can be removed easily and repositioned during the application process (which I had to do 3 times to get it centered) or removed and trashed when you decide to replace it.

I checked the various companies offering skins, including Gelaskins and Skinit . While both companies offer the same products and, as far as I can tell, use the same material, Gelaskins is $5.00 less at $24.95 than Skinit’s $34.99 price for a skin on a 17″ laptop (you get free shipping with Skinit on orders of $35 or more). With shipping, the total for the Gelaskin came to $34.90. Product quality from both companies looked the same on their respective websites, so I went with the Gelaskin.

The skin arrived in a large, stiff, mailer envelope with “Do Not Bend” stamped on the front. Opening the envelope revealed the skin in a clear plastic sleeve on a backing card of stiff paper. Simple instructions were printed on the decal card. I cleaned the lid of my laptop, removed the skin from the card, and applied it to the lid of my laptop. The skin doesn’t cover the entire laptop lid, so getting it centered and level takes some patience and a decent eye. I needed to reposition the skin three times before I was satisfied with the placement. Removing the skin was easy enough, though I figured I needed to make sure the adhesive side didn’t come together or I would be out of luck. It looks ok, except for the incorrect color of the image. I’m about to leave on another trip, so it’s too late for a return/exchange. Plus, I’ve applied the skin, which voids any return or exchange option. I’ll have to accept it and maybe contact them later if I decide to do another one. There is no help on either the Gelaskins or Skinit sites regarding color fidelity.

I created my image in Photoshop, adding my company name and phone number as both an advertisement and an easy way to contact me if me and my laptop ever got separated and an honest person found it. Gelaskins provides the dimensions of the skin which makes it easy to create yours in an application like Photoshop then upload it using their customizer tool.

Here is the image I uploaded: 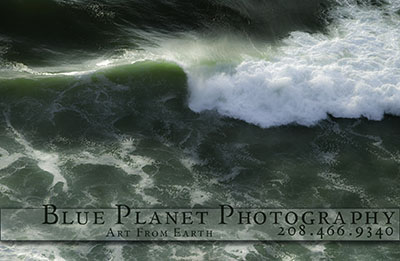 My computer monitor and software are color calibrated so I’m ensured of accurate color when I’m editing and processing my photographs when files are printed on color-calibrated equipment. When I received the Gelaskin, this is how it appears: 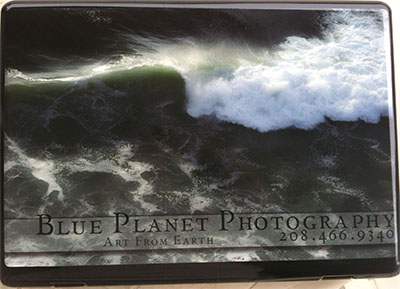 The photo of the installed skin was made on my iPhone in overcast daylight, but the representation is accurate. Overall, the image is dark, lacking the green and brightness of the original. It’s very disappointing. I know how difficult it can be to match color; a few years ago I was creating dye sublimated products for clients sending me image files processed with no color calibration or with custom embedded profiles. But, I do know that color should be represented fairly accurately when both ends of the process use color calibrated equipment. Again, there isn’t any information I could find at either Gelaskins or Skinit that addressed color accuracy.

My main reason for getting the skin was to differentiate it amongst other, similar, laptops and, honestly, the only person that will know the color is not the same as the original is me (well, maybe not now). Print quality is good, however. Fine details are rendered sharply. The skin is not smooth or glossy. There is a textured, grid pattern to the surface, giving the image more of a matte or luster finish. Other than the issue with the color, I’m pleased with the product so far. We’ll see how the corners and edges hold up and if they begin to peel up after some use. For now, I’m relieved I have a distinguishing characteristic to my laptop, but will still keep my eye on it as it goes through airport security.